How do you introduce your children to fractions? To do so, we will begin with a story. Please grab an apple, a knife, and tell your children the following story. Ask him/her to cut the apple as the story evolves. Helpful tip, I encourage you to change the names of the children in the story to the names of friends of your child. Have a pen and paper to write down the name of his friends so he/she can distribute the pieces between his friends.

The story was taken from the book The Teaching of Arithmetic and the Waldorf School Plan by Hermann von Baravalle, Ph.D 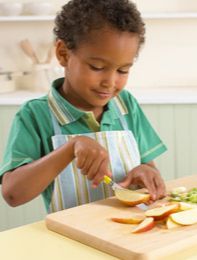 Melinda came to school with an apple. She was just about to eat it when Christopher arrived and saw it. She wouldn´t keep it all to herself so she cut it into two pieces and gave half of the apple to Christopher. Just then Jeanne and Ralph came in. Melinda and Christopher cut their halves in half. At that time the apple was in 4 pieces. Each person had one fourth. Before they could eat the fourths, Donald, Lisa, John, and Linda came in. Now the fourths were cut in two and there were eight pieces for eight children. The apple had been divided into eighths that were about to be gobbled up when Claude, Francis, Erich, Olivia, Miriam, Max, Michaela, and Hilary bust into the room. Now they had to cut each of the eight pieces of apple in two, to make sixteen pieces, very tiny, each piece being one-sixteenth of the apple. They were all so small.

Before, there was one piece. Now there were sixteen pieces; but though 16 is larger number than 1, each piece was smaller, by far, than the 1 apple.

We started with one apple. To share it, we cut it into 2 equal pieces.

Each piece is one half of the apple. As the 2 halves of the apple make one whole, they are related to the whole by the number 2 but we have to allow that 1 is divided into 2 pieces.

What would be a good way to show that in writing? We can use the knife-cut line as a divider line and if we write it, it could read “1 divided by 2” or “one half”. 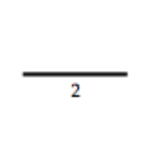 Now you are ready to teach your child how to add fractions!